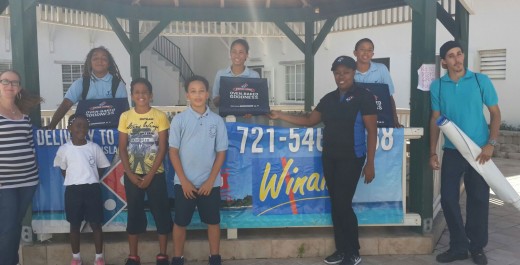 PHILIPSBURG:— Domino’s Pizza, along with Winair gave students on Saba a very unique treat for them in honor of Saba day. Many pizzas were flown by Winair to Saba on Friday where a representative of Domino’s and Winair delivered them to the island’s school children. “It’s pretty cool to think that a whole island of school children enjoyed free slices of pizza delivered by airplane. Domino’s Pizza always has been an active and positive part of the communities in which we serve; it was a pleasure to provide this treat in honor and thanks of Saba Day and the upcoming Holiday season,” said John Caputo, the Domino’s franchisee.

The pizzas were made hot and fresh at the Domino’s location at Princess Juliana International Airport and were accompanied along on the Winair flight by Domino’s Manager Audrey Agard. Once on Saba, they went straight to the various schools where they were served to the anxiously awaiting students and staff.

Domino’s and Winair partnered earlier in the year to provide delivery of pizzas to Saba and Statia on regularly scheduled flights. Customers can call the airport location at 721-546-7722 or by local call on Chippie 599-416-7380 and TelCell 599-416-1564 to place their orders and they will be delivered on a Winair flight. There is only a $2.75 delivery charge added to the order for this service and customers get the same pricing and specials as those on St. Maarten. This partnership garnered worldwide attention in August when the two companies set a World Record by delivering to 8 countries/islands from a single Domino’s location all in less than 46 minutes.